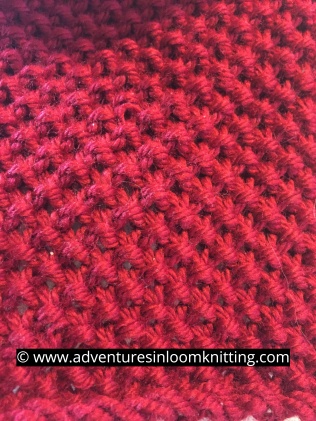 The past few weeks, I’ve been working on a new stitch pattern called the Moss Slip Stitch from the Loom Knit Stitch Dictionary (you can read my review of the book here). The Moss Slip Stitch is a beautiful stitch, especially in small gauge. I have to say it’s the most beautiful stitch I’ve knitted thus far and my KB round looms make it look really nice because of the tight 3/8″ loom gauge. The pictures don’t do it justice.

The problem is that I started out with a knit stitch for the selvedge and I didn’t realize it would make the whole scarf curl in. I should have done a garter stitch. While there are purls in this pattern, it was not enough to stop the curling. I think I will need to make this thing double length so that I can loop it around twice and make it a nice infinity scarf/cowl scarf.

Here’s a picture of my recent progress. I still have a long way to go to get this done. 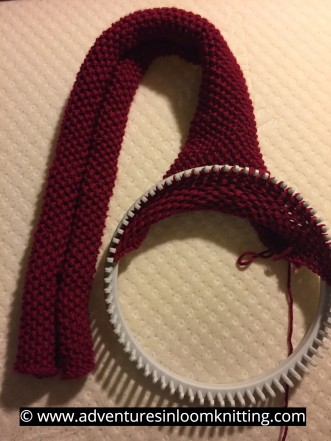 This project requires a lot of patience as more than once, I’ve done 1-2 rows incorrectly and then had to figure out which row I should have done and then unravel the mistakes and start that section over again. And whenever I set the project down and start up again, I tend to lose my place.

It is a lesson in patience.

How can it be that the most beautiful stitch I’ve knitted thus far has resulted in a project I’m hesitant about finishing?

And yet, because the stitch is so lovely, how can I not finish it? The knitter’s moral dilemma.

For those wanting to try the moss slip stitch on a loom, I would suggest getting a copy of the Loom Knit Stitch Dictionary. This pattern is a slightly different version of the moss stitch and I haven’t seen it in other tutorials, or I’d post the pattern instructions here.

It’s similar to the Irish moss and the double moss, but there are stitches that you skip over and slip behind the peg.

I did find a needle knit tutorial of this stitch on YouTube, but the finished piece looks a little different because the video shows how to knit the moss slip stitch in two colors rather than one. However, it is essentially the same pattern (if you follow the video, you’d just need to convert for the loom).

This site uses Akismet to reduce spam. Learn how your comment data is processed.

Join me on my next adventure!

Please note that some of the links on this blog are affiliate links, and at no additional cost to you, I will earn a small commission if you decide to make a purchase after clicking through the link. Please understand that I try to recommend products that I’ve actually used or products that I am personally interested in.